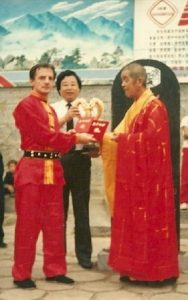 Sifu Walter Toch has been intensely active in the martial arts for over 50 years now. He works as a professional martial arts teacher and is always open for every new development. He is also a self-taught scientist and author of several articles, books and DVDs.

Sifu Walter Toch is of the first generation “Shaolin Kung-Fu & Taiji Chen Style” in Europe and preserves the traditional base of the Shaolin Temple “Song Shan Henan China”, where Sifu Walter was one of the first western students allowed to receive lessons and to graduate (1990).