Rob Sensei took up Judo at the age of 14.
During his college studies in Leuven, he loved practising Judo and Wadoryu Karate.

In whatever style Rob Sensei entered the Tatami, he always managed to continuously impress his colleagues with his tremendous martial skills during local training sessions and international seminars. Rob Sensei is also a marvellous and very inspiring Sensei for young Budoka.

Rob Sensei assisted many of following Sensei in international seminars or joined them during several ‘training vacations’ around the world:

Rob Sensei will be one of the three superb Sensei in this first “Junior GoR” edition. 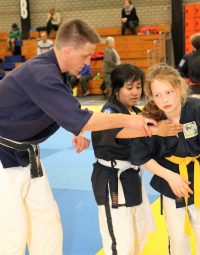