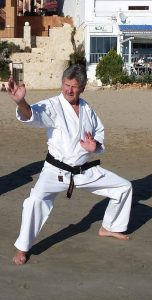 Pieter Sensei started in 1965, at the age of 20, with Karate in an Antwerp Dojo in Belgium. Two years later he trained every two weeks in the Netherlands with the well-known Dutchman John Bluming, a highly valued student of Sensei Mas Oyama, founder of the Kyokushinkai karate.

In South Africa, Sensei Harms first met Sensei Morio Higaonna and Sensei Chinen, for whom he had extraordinary admiration at the time. After some in-depth discussions and meetings with both Sensei’s, Sensei Harms decided to switch to the Goju-Ryu Karate-do. In 1974 he traveled to Tokyo, Japan to train with Sensei Higaonna in the Yoyogi dojo.

In 1997 Sensei Pieter Harms decided after years of intense study on the Okinawa Goju-Ryu Karate, to turn directly to Hanshi Eiichi Miyazato, the real successor of Chojun Miyagi Sensei, founder of the style. The purpose of this was to turn directly to the source in order to bring the Okinawa Goju-Ryu Karate in Belgium as close as possible to the base.

To date, Sensei Harms is still the only official Chief Instructor in Belgium  of the traditional Okinawa Goju-Ryu Karate, and he keeps extremely active in spreading his knowledge in this domain. When looking back, we see that when he started in 1970 in Leopoldsburg with one club, there are nowadays about 25 clubs in this style of which 90% of them he laid at the basis.