In 1429, the three kingdoms in Okinawa were unified to form the Kingdom of Ryukyu. Fifty years later, when King Shō Shin came into power in 1477, the practice of any kind of martial arts was banned. From that moment on, Tō-te and Ryukyu kobudō (weaponry) had to be taught in secret amongst the Ryukyuan people. 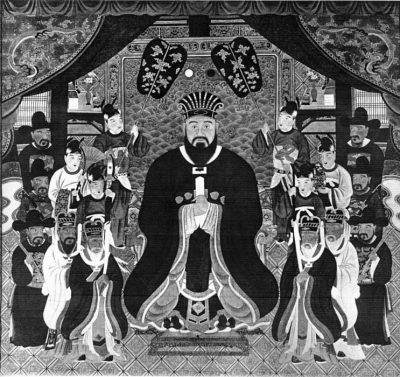 The ban was continued in 1609 after Okinawa was invaded by the Satsuma Domain of Japan. Despite the intended purpose, these bans contributed to the development of kobudō, which uses common household and farming implements as weaponry. Furthermore, the Okinawans combined it with Chinese martial arts and the existing local variants to form Tōde (唐手 Tuudii, Tang hand, China hand), sometimes called Okinawa-te (沖縄手 Uchinaa-dii).

The guardians of the King however, continued to be trained in the various aspects of the modern martial arts we know to date (Karate Jutsu, Aikijujutsu, Kyusho Jutsu, …) and many other special techniques that were only conveyed to them in the confines of the palace, as was the case for the Motobu Udun Ti style. As a secret bujutsu of the Ryukyu royal family, Motobu Udun Ti was handed down through the generations of the Motobu family, transmitted in secret from father to eldest son. These techniques were kept utmostly secret and even family members were not permitted to observe the training. For that reason, the very existence of the art, not to mention its technical curriculum, has been little known to the world.

By the 18th century, different types of “Te” had developed amongst the Okinawan people in three different villages – Shuri, Naha and Tomari. The styles were named Shuri-te, Naha-te, and Tomari-te, respectively and belong to a family of martial arts that were collectively defined as Tode-jutsu or To-de.

Well into the 20th century, the martial arts of Okinawa were generally referred to as Te and Tii 手 in Japanese and Okinawan for “hand”.  Karate (Okinawa-te or Karate-jutsu) was systematically taught in Japan after the Taisho era (after 1926).

The “Guardians of Ryukyu”

Now the fun part starts … “Ryukyu” is usually written like “琉球” in Chinese characters.
In Japan and Okinawa, a lion (shisa) and a dragon (ryu) are both regarded as guardians/protectors. Crazy to notice is, that a dragon (龍) is also pronounced as “Ryu” and a ball (球) as “Kyu” in the Japanese language. So, in case of the seminar t-shirt, Ryukyu spelled in Kanji as 龍球 or … “dragon ball”, is a kind of pun on the Chinese characters 琉球. So, a mythical image of a dragon, holding a ball with the ancient Okinawa flag on it, was a symbol too hard to resist for our seminar, which thus stands for “Guardians of Ryukyu”: the protectors of the traditional martial arts inside the kingdom of Ryukyu or the selected protectors in secrets arts of a king in Ryukyu. 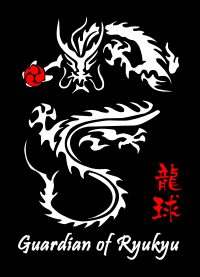 TIP: Did you know that a mythological sea dragon has three versions? If it has three fingers it is Japanese, portrayed with four fingers it originates from Okinawa and if it has 5 fingers it is a Chinese dragon.

We are not just ‘another seminar provider’.

It is in our intention in this open style “Guardians of Ryukyu” weekend to expose ancient techniques and secret combinations hidden inside our various martial arts styles packaged into efficient and effective, traditional or modern approaches by means of exquisite, internationally acknowledged Grandmasters and Sifu/Sensei.

As always, all the Sensei and Sifu’s have an undisputed reputation of being among the “martial best of the best” and studied for many years under internationally known Masters and Grandmasters. It is very rare to have this kind of accumulated international experiences on one giant Tatami!

The GoR weekend is organized by a Bushido team with more than 37 years of proven martial excellence: “In everything we do, we believe in challenging the status quo, we believe in thinking and acting differently. The way we challenge the status quo is by making our martial arts experiences efficient and effective, meticulously organized, and tailored to the group needs and individual capacities. We also just happen to manage an awesome Dojo with fantastic Sensei and members … .”

The backbone of the event is “Shaolin Dojo vzw“, a non-profit organization with its continuing mission: “To harvest, cultivate and propagate the knowledge of traditional and modern martial arts. To boldly go where no martial artist has gone before …” ?.

An event of this size cannot be organized without the help of many fantastic, good-hearted Sensei, Senpai, family and friends, willing to invest a lot of their personal time to achieve our high-quality standards. To ensure a proper funneling for all your questions or references till the actual event, your two main point-of-contact will be: Mario Michiels and Chris Michiels.

Seats are limited … last year we went swiftly over the full capacity, so we enlarged our giant Tatami and even wove it into a wonderful pattern.

Hope to see you soon at our “Guardians of Ryukyu” weekend!